Furniture and an insight

So since I last left you we finally pulled the trigger and got our bedroom furniture. We went to ten stores since November and had countess discussions. On Saturday we went and rented a van to pick up our purchases and over the past few days, Hubs has been assembling and moving the heavy big stuff in and out of the bedroom. Right now, our condo is a bit of mess, with boxes and odd furniture pieces here and there but, after this weekend with my planned purge and organization everything will be back in its place and we will have a new looking condo (well at least two rooms) until we decide to paint which will be in the spring.

My goal is to be focused on keeping the house tidy and clean because when it is messy and chaotic it makes me stressed and a bit crazy. Then that feeling on top of the craziness that is my job and some other life issues have put me close to the edge. Last week, after getting some not so great news, I just has a meltdown which is a combo of shutting down and crying a pure basic pity party. Except I have been having them more often than not and I realized that misery love misery and I can continue down this path or I can change it. So after a long talk with Hubs, we have decided to start doing thing that make us happy to attract more happy and positive things. Sure there are situations outside our sphere of influence but, we can change ourselves.

Granted, this is not a huge revelation but, the changing anything including our mid set will be an undertaking. I am feeling better about things and yes, things still bum me out but I am trying to spin them into good things. It works on more situations that it used to.

Also, I know that I have not commented on some of your blogs as much as I used to. I am still reading and in fact star number that I mean to comment on. Work has become big brother and I have not been on the computer when I get home lately. I will catch up soon.

With the new year came a list of things that we hope to accomplish in 2011 in our condo. So far the first two weeks of the year have been productive. We purchased a rug for our living room and an affordable one at that. This weekend we had our backsplash installed with the help of a friend or ours. Actually, Hubs and our friend did most of the work. I just picked up lunch. But the backsplash looks amazing and we are happy with the results.
The rest of the list we hope to get done throughout the year they include:
-getting a humidifier installed
-paint the bathroom
-re-do the office
The one that we though would be easy but has turned into such a project is finding a bedroom set. We have looked but have not found any that is within our budget and that is stylish. Any ideas??
as mused by Christina at 8:10 PM 1 comment:

The last few months of 2010 sucked. There is no other way to wrap it up other than saying it sucked. It started with Hubs in the hospital and then just rolled on. I was looking forward to saying a fond fair well in 2010 saying good bye to the suck and looking forward to a fresh start a new year with new possibilities.
But 2010 did no go quietly, when we though that it could not get any worse...it did. On Christmas day, while we were in NY our cat Chaplin passed away at the age of 7. To say we are devastated is an understatement. He got ill before we left and we went to the vet, they told us he was sick with kidney disease and we made plans to have him see a specialist when we got back. Our pet sitter sent us daily email updates but, he did not make it and it just crushed us. My heart is broken and we miss him so much. The to top that off, we got stuck in NY for an additional two days thanks to the blizzard and we were going stir crazy. We just wanted to get home.
When we finally did, we were greeted by two happy dogs but Chaplin's presence was missing. We were all missing him. I catch myself trying to find him or one of the dogs is looking for him. And then it hits you, he is gone.
I was never a cat person and he was a compromise with Hubs. Yet, once he picked us out because he did, we were hooked. Chaplin was a sweet, funny, loving , patient and brave boy who fast became part of us.
We are missing him so much 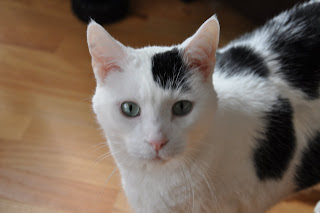 So while 2011 has unlimitless possibilities. I am finding it hard to close the door on all the crap that was 2010.
as mused by Christina at 9:40 PM 5 comments:

All the content on this blog is original. Don't steal my stuff...

Christina
A native NYer who now calls Chicago home. I am a 30ish professional, part time grad student and a woman. I love to travel, to paint to read, and to wonder. My family and friends are my world and they are all over the world. Still trying to make sense of it all the good, the bad, the pretty and the ulgy. Still a bit cynical and skeptical-my New York traits but hope, dreams and desires conqure all-at least that is what I keep telling myself.